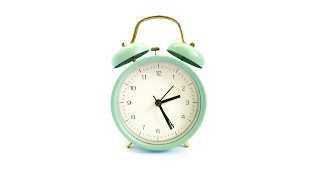 About fifteen years ago I headed down to the local yoga studio where I was leading the regular Sunday evening sit. When I got there I was the first there as usual, and I opened up and set out my cushion and sat waiting for the others to come.

In those days we had a small but loyal group, but our numbers had be dwindling. I had told myself that I would keep leading the group for as long as people came. But this particular Sunday seven o'clock came and no-one had arrived. I decided to just sit on my own for the hour and then go back home.

But around twenty to eight I heard a kerfuffle in the reception area and the hushed but happy voices of a few people arriving. Confused I stood up and went out to meet them, and they greeted me normally as if nothing was happening. It was at that point that I twigged that the clocks had gone back and, it appeared, I was the only one who had not realized! Around half a dozen people turned up, and yes I did get some ribbing when I told them what had happened.

The clocks went back here today. Nowadays it is harder to make the mistake I did that year with our phones and computers, but it is still possible to get confused, and it is still common for our body clocks to not want to make the change. I'm not going to get into the clock-change argument, but suffice to say I won't be upset if we abandon the process completely as other countries are beginning to do.

One positive thing the clock changing does do for me is to mark a seasonal change. This year has been weird in this area due to the abnormal weather patterns (snow in April - 80° in October) but even so this weekend has felt like a shift as we enter the darker season.

I have written before about how I like to follow the tradition of many cultures in the spring of thinking of new birth and new beginnings. In the fall I like to follow the return to the earth, to reconnect with nature, to reassess as we 'hunker down' for the cold and wet.

This idea of allowing our practice to follow the practicalities of the seasons is of course nothing new, and almost all traditions have some version of it. The Buddha in his day instigated what we now call the 'Rains Retreat' or 'Rains Residence,' a period of three months from roughly July to October. This corresponded with the local monsoons, a time when travel was dangerous to the traveler, to crops and to animals. So the monks committed to stay in one place and this formed a central part of the monastic year. Nowadays many traditions follow the same pattern but sometimes translated to match the local climate - so for example Plum Village in France practice their retreat between September and December.

However we practice we can use the rhythms of the seasons to inspire us - and to return us to an awareness of the world around us. What I like about the concept of the Rains Retreat is that while on the one hand it's roots were immensely practical, the requirement to not travel and stay in one place is a wonderful opportunity to refresh, renew and reconnect. For me, I find that this time is an excellent time to practice finding some stillness. I have linked below a fully guided meditation on this that you can use in your own practice if you wish.

PS. Those of you who have been reading this letter for a while will know that I have been traveling and had other commitments for a number of weeks. Thank you for your patience while I have been gone! It has been a mix of family, pleasure and work travel and commitments. There have been high highs and low lows and plenty of opportunity to practice equanimity - not that I always managed to! I am glad now that I can stay in one place for a while!

cjrobson · Finding a Place of Stillness

Photo by Abdul A on Unsplash