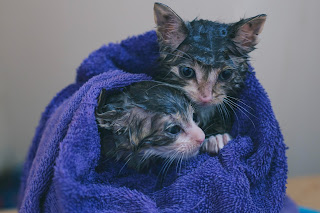 The weather this weekend has been lovely - cold, crisp and clear. Possibly my favorite time of the year. Of course this won't last, soon we will inevitably get that half-mist-half-rain that threatens to soak you through even though it hardly seems like it is raining. I was born and brought up in Southern England and now live in the Pacific Northwest, and the one thing they both have in common is that the weather can be described in just one word. Soggy.

I think soggy is a great word, one of those words that speaks to a shared experience. You probably have a specific image of your own, maybe of long wet grass or trying to read a map in the rain or getting back home from a walk after an unexpected downpour or getting out of a tent in the early morning with everything covered in dew. It is one of those evocative words that naturally causes our minds to jump to a specific experience.

The Buddha didn't want his monks to be soggy. Now, remember the monks lived a life that was largely spent outside, and as I mentioned last week they lived in an area where for several months of the year there was intense rainfall. So the monks knew all about being soggy, and just like us they probably had very specific memories and images that came up when they were exhorted not to be soggy.

There is even a 'Soggy Sutta,' the Avassuta Sutta. I know, it's a great name and one that makes me smile. This sutta takes place in a brand new, luxurious hall that the locals had just built and that they had invited the Buddha to teach in. After the locals had left to return to their own houses the Buddha asks the Venerable Maha Moggallana to give a dhamma talk to his fellow monks. Now I can only guess that the fact that they were in this dry hall protected from the elements inspired Ven. Moggallana to use the simile of being soggy. So what does it mean to be 'soggy?' Moggallana tells us:

And how is one soggy? There is the case where a monk, when seeing a form via the eye, is, in the case of pleasing forms, committed to forms and, in the case of displeasing forms, afflicted by forms. He remains with body-mindfulness not present, and with limited awareness. And he does not discern, as it actually is present, the awareness-release & discernment-release where those evil, unskillful qualities that have arisen cease without trace.

He repeats this for perceiving sounds, smells, taste, touch and thoughts.

What he is saying is that we are 'soggy' when we perceive these things and allow ourselves to be caught up by the pleasant things and aversion to the unpleasant things, and while doing so we fail to be truly present and are unaware of what is really going on. This is being soggy.

So how does Moggallana suggest we avoid being 'soggy?'

And how is one not soggy? There is the case where a monk, when seeing a form via the eye, is not, in the case of pleasing forms, committed to forms nor, in the case of displeasing forms, afflicted by forms. He remains with body-mindfulness present, and with immeasurable awareness. And he discerns, as it actually is present, the awareness-release & discernment-release where those evil, unskillful qualities that have arisen cease without trace.

So not-sogginess comes about by not getting caught up in the pleasant, or in aversion to the unpleasant, and by retaining presence and awareness.

And that, of course is what we practice. To be present, aware and not caught up in the whirlwind of the things we perceive and experience. To not be soggy.

So whatever the weather brings you this coming week, wherever you are in the world and whatever you experience, I wish you all to be not-soggy.

P.S. As an aside, in the middle of the sutta Ven. Moggallana goes into a metaphor of how Mara - the personification of spiritual unskillfulness, death and evil - can gain entry by burning down a dry grass house but not a clay house - interesting because it is a close parallel to the parable of the wise man in the Christian tradition and, of course, the traditional fairy tale of the three little pigs. Think Mara as Big Bad Wolf! You can read it in the full sutta, though I have to say Moggallana can definitely be accused of mixing metaphors with sogginess and resistance to fire! The message remains though of the need to be structurally sound, built from sound materials and 'not soggy.'

P.P.S. Below I have linked a fully guided meditation on staying present - feel free to use it in your practice in whatever way you feel helps.

cjrobson · Being Here - Not There

Photo by Rebecca Campbell on Unsplash