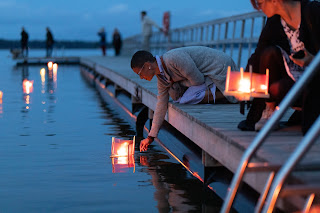 I am a little bit late with my newsletter this week because of the long weekend here. It is Memorial Day in the US, which means that many of us get a three-day weekend with the holiday on the Monday. I often have to work over weekends, but fortunately this weekend for me was a genuine three days of relaxing and switching off, which was much appreciated.

Memorial Day is not a holiday I grew up with - the equivalent holiday where I was born is in November (in fact I was actually born on a Remembrance Day). Aside from the extra day off I haven't really connected much with the actual holiday behind Memorial Day - like many people I am somewhat conflicted about the holiday. I am not going to go into that in this message, as I don't feel it would be appropriate right now, beyond saying that I do recognize the sacrifices that have been made and the importance of remembrance. As George Santayana observed, "Those who cannot remember the past are condemned to repeat it." It is important to remember.

It is this idea of memory and remembrance that I have been contemplating today. In doing so I was thinking a bit about the pali word sati. Sati is usually translated as 'mindfulness,' however that is a word that I feel has become a little watered-down and over-loaded in the west, especially in the last decade or so where 'mindfulness' has become a catch-all for so many things. I was asked at the last company I worked for if I would be interested in running some 'mindfulness' classes for the employees. I think they had bought the message that a mindful employee was a productive employee. I responded by asking how they would feel if some people resigned from the company after the class - I wasn't asked a second time.

Looking up sati in Buddhadatta Mahathera's Pali-English Dictionary he renders it first as 'memory,' and then as 'mindfulness.' I was taught to think of sati as 'recollection,' and I find this more helpful, as it is this action of remembering, of recalling what is going on that is so important.

The word used for meditation on the breath in the suttas is anapanasati - literally the recollection of in-breath and out-breath. Some people find the use of 'recollection' here a bit odd - do I really need to 'recall' the fact that I am breathing? The answer is of course yes - we go through our lives completely oblivious to the fact that we breathe, and often only 'remember' this fact when we exercise, play a musical instrument or have a cold. Simply remembering that you are breathing is anapanasati.

The Buddha hammers this home in a rather humorous analogy called 'The Beauty Queen,' part of the Sedaka Sutta. He sets the scene thus:

Now, he uses this set-up as a way to imagine a scenario where it would be easy for the (celibate) monks to become distracted. Even as he was doing this I can imagine some of them beginning to drift elsewhere! He then brings them back to earth by introducing an ordinary man who is strong-armed into performing a task:

They say to him, 'Now look here, mister. You must take this bowl filled to the brim with oil and carry it on your head in between the great crowd & the beauty queen. A man with a raised sword will follow right behind you, and wherever you spill even a drop of oil, right there will he cut off your head.'

Oof. The poor man's mind here mustn't get caught up in the crowd, or the beauty queen, but instead what does he have to do? He has to remember the pot of oil on his head and his task. This is mindfulness. The Buddha elaborates:

I have given you this parable to convey a meaning. The meaning is this: The bowl filled to the brim with oil stands for mindfulness immersed in the body. Thus you should train yourselves: 'We will develop mindfulness immersed in the body. We will pursue it, hand it the reins and take it as a basis, give it a grounding, steady it, consolidate it, and undertake it well.' That is how you should train yourselves.

Being mindful isn't being blissed-out and relaxed, it is paying full attention and remembering what is going on. If the hero in our story 'zenned-out' he would be dead. If he started lusting after the beauty queen he would be dead. Instead he needed to remember that he had a pot of oil on his head and a task to complete.

I have linked below a fully guided anapanasati - recollection of breathing in and out - meditation. Feel free to use it in whatever way helps your practice.

Photo by Oliver Hotakainen on Unsplash