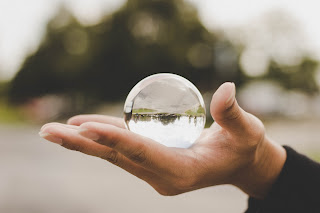 There is a recurring joke that goes around new-age and 'alternative' circles. You may well have seen it, as it is one of those things that gets posted and re-posted on social media, often with the poster claiming it happened to 'a friend of mine' - and who know, it may have. I can totally imagine it happening in real life. Anyway, there are various versions of it, so here is my attempt at a re-telling:

Yesterday I went to our local alternative store looking for a Crystal Ball. I searched among the many different ones they had until I found the perfect one. It was large, about eight inches in diameter and completely clear. I took it to the the older lady behind the desk. She wrapped it carefully and held it towards me. I took hold of it, and before she let go she looked me straight in the eyes.

"Be sure to cover it completely with a cloth when you aren't using it, dearie" she whispered, without letting go of the ball or my gaze.

I trembled. "To... to stop the spirits getting through?" I asked, weakly.

"No dearie - so that your house doesn't burn down if the sun hits it!"

I was thinking about this joke earlier this week as, once again, a version of the story had popped up on my news feed. It reminded me of an equally-apocryphal story that is often told in Buddhist circles. Often it is told as a Zen story, sometimes directly attributed to the Buddha (which is false). The story goes like this:

An elderly Zen master is sitting quietly in the zendo when a group of young monks burst in excitedly. "Roshi, Roshi, come quickly!"

"What is it?" he replies, "what has got you all so excited?"

"Roshi - come down to the river and see - Sensai Ko is walking on the water!"

"And tell me, young sirs, how much does the ferryman charge to take one across the river?"

"Then two pennies is what Sensai Ko's trick is worth!"

I suspect that many of us sometimes wish for something more magical in our experience, wish that we could get some superhuman capability or divine insight that will drive us forward in our path. And, don't get me wrong, sometimes that might happen. But for the most part we have what we have.

One of the most important lessons that I have learned is that I have, right now, everything I need to progress on the path. There is nothing outside of me that I need, and for as long as I spend dreaming or yearning for something else then I am wasting energy and missing the point. What I have right now is enough for right now. And that's what matters.

I have linked below a fully guided meditation on the concept that 'This is Enough.' Feel free to use it in whatever way you feel helps you in your practice.

Photo by Anika Huizinga on Unsplash