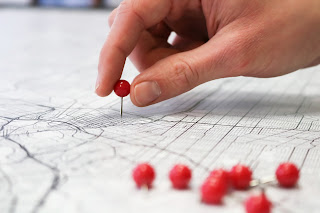 I am not much of a computer-game player - I have to admit that my short foray into video games ended with the Monkey Island franchise (a fact that will allow some of you to work out exactly how old I am).

This week, however, we have been completely engrossed in an online game called Geoguessr. The premise is quite simple - the game drops you into a random place in the world (in Google Street View), and your job is to guess on a world map exactly where you are. You can look, move and zoom around in Street View trying to get clues for where you might be - street names, the writing system, street furniture, web-addresses on store fronts and signs, types of trees - you name it, anything can be a clue. Rounds can be really easy - such as when we were dropped right by the sign for London Bridge - or quite tricky. When we were dropped in the middle of China Town in Manila in the Philippines there were many conflicting clues!

The story we tell ourselves, of course, is that this is an educational game. For instance, over the last week I have learned that:

It is truly amazing that I have arrived at the age I am without knowing any of these facts. Now armed with them my life going forward should be so much easier.

Despite all that, it is not unusual to be able to pinpoint the location to within five feet or so - which is a great feeling - and quite amazing really when you consider the starting point can be anywhere in the world.

One of the things that makes the game so interesting is the fact that you are using real images of the locations. The people you see are real people, living in the very locations you visit. The buildings, cars and garbage bins are all real and are exactly as they were when the Google Car drove past. What is strange is how places can appear both unfamiliar and familiar at the same time. The writing script, the climate and the trees in Indonesia might look very strange to us, but the people, the cats, the bus stops, the auto-repair stores and the direction signs seem much like those at home.

I wrote a couple of years ago about the practice of "Sending to the Ten Directions." This is the final part of the traditional Metta-Bhavana practice where we take the feelings of lovingkindness and goodwill that we have been generating for a small number of specific people and set our intentions to feel and act with lovingkindness to all the people in the world - wherever they are and whoever they are. In doing so we recall that despite any surface differences all beings wish to be happy and well, and we should wish the same for them and treat them in that way.

Playing Geoguessr may not be teaching me an awful lot of practical life skills, but it is wonderful to be able to see those who are living in the Ten Directions, and see where and how they live. And that is something that is valuable to me.

I have linked below a fully-guided meditation on Sending to the Ten Directions. Feel free to use it in whatever way helps you in your practice.

Photo by GeoJango Maps on Unsplash