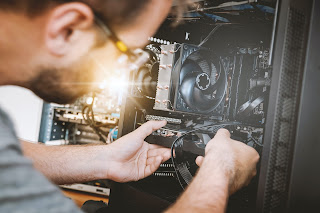 Be comforted, that in the face of all irridity and disillusionment,
And despite the changing fortunes of time,
There is always a big future in computer maintenance.

There are certain things that really manage to wind me up. Small things that are on the surface annoying, but which somehow seem to automatically send me into full melt-down. You probably have your own triggers, but for me it is badly-written software. You know, the app on your phone that just refuses to allow you to enter what you need to, or the website that sends you into a loop when you try and pay a bill. I work every day with computers and have written a lot of software myself, so I find it doubly frustrating when I feel - rightly or wrongly - that the developers of the program have just done a really sloppy job.

So I felt a lot of empathy recently when I read a piece by meditation teacher Padraig O'Morain where he tells a story about getting his computer repaired. He had taken it to a repair shop once, and in the process of 'repairing' it they introduced a new problem. So he was on the way to take it back to the shop, and was stressing about what their response would be to his new complaint.

It is an interesting thing that very often the things we get angry about haven't actually happened - but instead we project in our head what others might do, and we get angry about that. This is where Padraig O'Morain was, and to cap it all he was stuck in traffic.

It is at this point that he had his insight: He simply said to himself:

“My happiness does not depend on this.”

This simple realization can be a powerful mantra. As he observes in the article:

I have tended to live my life making the assumption that each thing I do is essential to my happiness and that it will be very bad indeed if I don’t succeed in doing it. I don’t know where this assumption came from and most of the time it has operated outside my conscious awareness. But bringing it into awareness has helped me to realise, in practice, the sheer silliness of this way of looking at things.

I really like this way of re-framing what is going on. By asserting that his happiness was not dependent on the reactions of the repair shop employees he removed the clinging that he was feeling for the outcome. And it is that clinging that causes the stress, the dukkha that causes us to suffer with our anger.

I know this is a lesson I need to take to heart more - especially when it comes to badly written software applications! “My happiness does not depend on this” is a mantra I will be using this week, maybe it will be useful for you, too.

I have linked below a fully guided 30 minute meditation on working with anger. Please feel free to use it in whatever way helps your practice.

Photo by JESHOOTS.COM on Unsplash