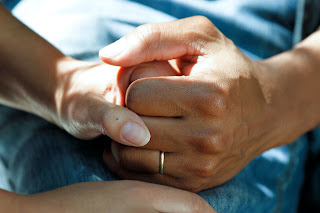 Recently I watched a short video essay called "My Religion and My Banned Books" by John Green, one of the 'VlogBrothers.' John Green is probably best known as the author of the highly influential YA novel "The Fault in Our Stars." The book follows the story of a 16 year-old girl dying of thyroid cancer and her romance with a fellow patient. I have not read the book (nor seen the movie that was made of it), but I know that it was a cultural phenomenon among teenagers a few years back and has a strong following amongst that target age-group, especially those who have themselves experienced this kind of loss or suffering.

In the video essay Green talks about his time as a Student Chaplain in a Children's' Hospital. It was this period of time that would eventually become the inspiration for the book. He talks about some of the unspeakable things he witnessed there (he calls them 'obscene') and the challenge of being a Chaplain in that situation. He observes:

The advice he was given really resonated with me. When we come across people suffering, or witness situations where everything is falling apart, our instinct is often to try and 'fix' things, or to offer our own opinion on what is happening and what should be done. What Green is saying here is that the wise thing, the courageous thing, the compassionate thing, is just to 'stand there' and be present with the person and their grief.

A while ago I wrote a letter about 'Skillful Words,' where we looked at the Buddha's advice on when to speak and when to stay silent. In it I refer to the Abhaya Sutta where the Buddha gives very clear instructions about when to speak and when to remain silent. Simply put, we are told to consider three things; Firstly whether what we are about to say is true - and if it is not, it should never be said. Secondly, is what we are about to say beneficial to the person hearing it? If it is not, then even if it is true we should refrain from saying it. And finally will it be pleasing for the other person to hear? If it is true and beneficial but not pleasing to hear, then we are encouraged to carefully weigh the timing of when it is said.

You can see from this that the situations that Green found himself in as a Chaplain the skillful thing to do would be to remain silent much of the time. And being silent meant that he was present and available for the children, their families and the loved ones in their time of grief.

For me, as a type-A problem solver, this is an important lesson to learn. My own natural strategy is to try and fix things when they go wrong, or to offer an opinion when I think I 'know' what is right. But I think I need to take this lesson to heart a bit more: Don’t just do something. Stand there.

P.S. On hearing the advice "Don’t just do something. Stand there" I assumed that it probably wasn't original with Green's supervisor, even though I had not heard it before. And of course that is the case, with Quote Investigator observing that it is the type of reversal of a common cliche that probably was coined by many people independently. The earliest version they found was from someone quoting Martin Gabel in 1945.

P.P.S. I have linked below a fully guided  meditation on Skillful Words. Please feel free to use it in your own practice in whatever way you find helpful.