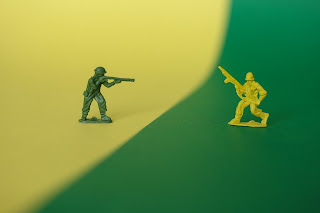 With everything that is going on in the world right now I thought it would be instructive to look back at some early accounts of what the Buddha said about war, and those who go to war. In the Samyutta Nikaya there is a story of two battles, which I believe can speak directly to our response to the current situation.

The battles in question were between King Pasenadi of Kosala and his nephew King Ajatasattu of Magadha. Pasenadi was a follower and acquaintance of the Buddha, but was still a king and did king-y things, including going into battle.

In the first battle of our story Ajatasattu raised an army and attacked his uncle. A fierce battle followed and Pasenadi's troops were overwhelmed. Defeated, Pasenadi retreated back to his capital.

Now this was before the age of social media, so news of Pasenadi's defeat first came to some of the Buddha's monks as they were out in the city collecting alms. I like to imagine them scurrying back to the Buddha with some great gossip to share!

Having heard the news the Buddha replied:

That is what the Blessed One said. Having said that, the One Well-Gone, the Teacher, said further:

Winning gives birth to hostility.
Losing, one lies down in pain.
The calmed lie down with ease,
having set
winning & losing
aside.

Here the Buddha clearly comments on the moral distinction between the attacker and the one attacked, but observes that both the 'winner' and the 'loser' are both harmed - the loser in pain, the winner now shrouded in hostility. He shows that the more noble way is to set aside winning and losing, that those who have done that are the only ones truly at ease.

This wasn't the end of the story, because there follows another battle. Once again Ajatasattu raises an army and marches against his uncle Pasenadi. Pasenadi raises another army to counter-atack and this time prevails, defeating the invaders and taking all of the troops and equipment hostage, together with Ajatasattu himself. Pasanadi considers what to do with the captured Ajatasattu, but eventually decides that the more noble thing to do is to allow him to leave with his life.

Again, the monks find out about all this while they are in the town, and again scurry back to tell the Buddha the latest news. Having heard this the Buddha says the following:

A man may plunder
as long as it serves his ends,
but when others are plundered,
he who has plundered
gets plundered in turn.

A fool thinks,
'Now's my chance,'
as long as his evil
has yet to ripen.
But when it ripens,
the fool
falls
into pain.

Killing, you gain
your killer.
Conquering, you gain one
who will conquer you;
insulting,     insult;
harassing,     harassment.

And so, through the cycle of action,
he who has plundered
gets plundered in turn.

It's hard not to see the parallels in these two stories with what is playing out on the global stage right now. For me, the key part of the response is the Buddha's observation of the 'cycle of action' - that aggressors only set the stage for further aggression, and may well become the victims of that aggression. To wage war and assume that there is an end, that it can be won and that's it, is pure foolishness. Aggression only generates suffering, to both the victims and - eventually - to the aggressor. As the Dhammapada says:

As long as evil has yet to ripen,
the fool mistakes it for honey.
But when that evil ripens,
the fool falls into
pain.

So what are we to make of this, given what is happening right now? It is obvious that we should be extending compassion towards the victims of the aggression we are seeing in the world. That is easy to see, and easy to understand, and is naturally our first reaction. Somewhat harder is to recognize that there are those nominally on the aggressor's side who have been dragged into this and will also be suffering - the citizens and even the soldiers. Most hard is to recognize that those who have actively chosen and caused the conflict have set in motion a cycle that will only cause their own pain, and to have compassion for them.

As I mentioned in last week's letter feeling compassion for the aggressor may be over the 'edge' for many of us right now as we see what is happening. However, learning to have compassion for those who are suffering - and for those who caused that suffering - should be our intention. Even if it's something that is hard to do right now, we can recognize that they have started a 'cycle of action' and will eventually fall into pain themselves.

I have linked below a fully guided Karuna Bhavana (cultivation of compassion) meditation where we practice generating compassion for both those who suffer and those who cause that suffering. Feel free to use it in your own practice if you think it will help.

Photo by Sahand Babali on Unsplash