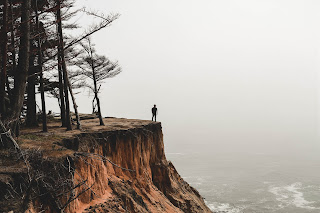 I have to admit that it is hard to write today's Metta Letter, to talk about lovingkindness and goodwill in a time where there is aggression and suffering in the world and when once again meaningless war is causing so much hurt. What does it mean to have unconditional metta in such a time?

Of course, the real answer is that it is more important, more relevant at these times, but working through that can be hard.

I am reminded of the wonderful words of Granny Weatherwax in Terry Pratchett's 'Carpe Jugulum' when she admonishes a young priest in this way:

‘There’s no greys, only white that’s got grubby. I’m surprised you don’t know that. And sin, young man, is when you treat people as things. Including yourself. That’s what sin is.’

‘It’s a lot more complicated than that -’

‘No. It ain’t. When people say things are a lot more complicated than that, they means they’re getting worried that they won’t like the truth. People as things, that’s where it starts.’

People as things. It is easy to see how in the current crisis that is exactly what we are seeing playing out. Real people - with hopes, dreams and faults just like you and me - are seen as just being 'things in the way.'

In our metta meditation we work to cultivate in ourselves the ability to view all beings with goodwill and lovingkindness, from ourselves to the most difficult of enemies. My first teacher encouraged us to identify in our practice the 'edges,' the points at which we started to stumble and reject sending metta. This could be for any of the people in the practice - even for our self. Generating goodwill for myself is hard when I remember what an ass I've been to someone earlier in the week. And if that's difficult then how much harder is it to feel lovingkindness for a dictator causing death and suffering across the world?

It's for reasons like this that Thanissaro Bhikkhu often prefers the translation of 'goodwill' for the Pali 'metta.' I highly recommend that you read his full essay on this, but I often find that when 'at the edge,' focusing on goodwill makes more sense.

As we go through this week we will probably all feel conflicting feelings regarding the current events and the people on all sides of the conflict. I'd like to suggest that if you do have conflicting feelings that isn't a bad thing - it shows that you are not 'switching off' your sense of compassion. At the end of the day this is a challenging time, but we can feel compassion for those suffering and still recognize that those perpetrating the violence are people, even if we find it hard to feel goodwill for them right now. Those who are causing the suffering do so because they treat people as things, let's not make the same mistake.

I have linked below a fully guided Metta Bhavana (cultivation of goodwill and lovingkindness) meditation where we explore the 'edges,' the points where difficulty begins. This can be a challenging practice, but as I often say 'if you find it hard you're probably doing it right!' Feel free to use it in your practice in whatever way helps. If you have never tried the whole practice before this could be a good one to start with.

cjrobson · The Edge - Metta Meditation when things are difficult

Photo by Alan Tang on Unsplash