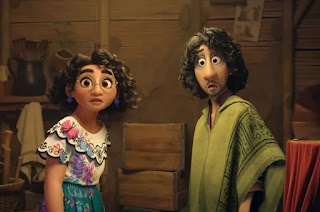 I'm going to start this by apologizing to any of you who have younger children, as you have probably been unable to get away from Bruno for the last six weeks. It is not an overstatement to say that the song "We Don't Talk About Bruno" from the recent Disney movie Encanto has been a huge phenomenon, topping the charts in the US, UK and many other countries. It also went viral on Tik-Tok and other platforms and is the most successful song from a Disney movie ever. And if your children are the right age, you probably haven't been able to escape it either. Sorry about that.

I have written about earworms before, but for those of you who are still blissfully unaware here is a little bit of background on the movie and the dreaded song in particular (don't worry, I will avoid any spoilers in case you choose to watch the movie later - which I would recommend).

Encanto is a piece of magical-realism set in Colombia. The story revolves around a multi-generational family living together in a beautiful casita, some of whom have special magical 'gifts.'  If you have read any Gabriel García Márquez this might seem very familiar to you! The 'family secret' is that Bruno has been ostracized and has left the family. When the main protagonist Mirabel asks about her Tio Bruno, they explain it all in the song "We Don't Talk About Bruno." If you wish you can listen to the whole song here.

The reason for Bruno's disgrace is that his 'gift' is that he can see into the future, and this, of course, is misinterpreted by the family as him causing the things he foresees. So let's have a look at the things prophet Bruno foretells. The list of his alleged visions start with family members being told that there would be rain on their wedding day (isn't that ironic?). Then various villagers add that he foretold:

Two younger family members then add that he foretold that they would struggle with love.

The humor of the song is of course that it doesn't take a prophet to predict any one of these things. Bruno is just aware of the human condition. He was ostracized not for his prophetic ability but because he saw the world as it really was.

I was reading earlier this week the well-known passage where The Buddha explains this to King Pasenadi:

What is interesting here are the three examples given - the rich, the afluent brahmins, and the pious monks. No-one escapes the reality. I wonder what some of the monks listening thought - I am sure there was a bit of a 'wait a minute!' moment for some of them.

Sometimes we choose to forget the reality of this world. Our goldfish will die, middle-aged men will grow guts, our hair will fall out, it will rain when it's least convenient, and young people will struggle with love.

Yet the world is still a wonderful place. The only issue comes when we choose to delude ourselves into denying the inevitability of our own impermanence.

Disney movies may or may not be your thing - but if you do choose to see it (I personally loved it) spare a thought for poor Tio Bruno. He was only telling the truth.

I have linked below a fully guided meditation on Impermanence. Feel free to use it in your practice in whatever way helps.

Aging and Death, From SN 3.3 translated by Bhikkhu Bodhi