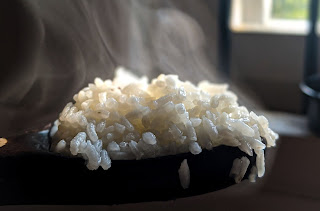 A question that often comes up is 'why metta?' - there are many aspects to meditation and following a spiritual path, so why the focus on metta?

There are, for me, several answers to this, but simply put I believe that the cultivation of metta - lovingkindness or goodwill - is exactly what the world needs today. As the world appears to get crazier and less and less understandable then the more important I believe it is for us as individuals to develop our own capacity for love, compassion, joy and equanimity (the four brahma-viharas that have metta as their core). As Leo Tolstoy said: “Everyone thinks of changing the world, but no one thinks of changing himself.”

When we work on cultivating lovingkindness we work on the one person who we can change - our self. Earlier this week I read the short Okkha Sutta - the Sutta of the Serving Dishes (or 'Rice Pots'). In it, the Buddha tells his monks:

This is a really strong statement. Remember that the monks listening to this would have relied on the generosity of local lay-people for their food - no gifts, no meals. We don't know the situation when this was said, but maybe they had received such a generous gift and were rejoicing, or maybe things were tough and they were hungry - either way they would have greatly appreciated three-hundred dishes of food in a day! So the bar here is really high. And yet the Buddha says that three simple moments of mindfulness of good-will, three brief moments of metta, were even more fruitful.

This may seem like hyperbole, but it really isn't. If you think about it, the person who reflects on and cultivates goodwill will naturally be more generous, more compassionate and more liberated (translated here as 'awareness-release,' being free from delusion). People talk (shout) a lot about freedom and liberation at the moment but the dialog is mostly about selfish freedom or license. Liberation of the mind stems from cultivating metta - goodwill and lovingkindness towards all beings.

This idea of the importance of cultivating metta is echoed elsewhere - I wrote a bit about it last year in the post on 'One Sixteenth.' There I quoted from the Itivuttaka where we are told:

So this week I would like to encourage you to practice those brief moments of metta. You don't have to be milking a cow to do it, it can be done at any point. Pausing and cultivating goodwill and lovingkindness can be a powerful act that we can all do.

PS. If you would like to practice a longer, more traditional approach to cultivating metta then I have linked below a fully guided thirty minute meditation. You are welcome to use it in any way that you feel helps in your practice.

Photo by Faris Mohammed on Unsplash