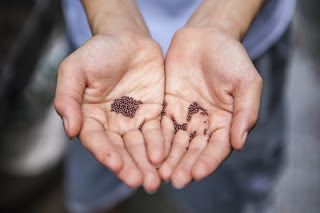 While I was out driving earlier this week I passed a farm called "Mustard Seed Farms," and it made me think of how evocative the humble mustard seed is. Small and perfectly round the mustard seed is a pungent spice and will grow into a plant with striking flowers and edible leaves. There are records of its use dating back nearly six thousand years. I suspected that the name of the farm was a reference to it's use in the synoptic gospels as a metaphor for faith, and a quick search later confirmed that this was the case.

The humble mustard seed is also used in the early Buddhist commentaries in the well-known but heart-wrenching story of Kisa 'Skinny' Gotami. In the commentary we are told that Gotami had a young son, who "running back and forth and running all around, while playing met his end." Gotami, understandably, was so distraught she went into what we, in modern times, would call denial:

Under the influence of her sorrow-to-the-point-of-madness,
she took the dead corpse on her hip and
wandered in the city from the door of one house to another
pleading: "Give medicine to me for my son!"
People reviled her, saying "What good is medicine?"
She did not grasp what they were saying.

Eventually someone took pity on her and suggested she talk with the Buddha, so she went to find him at the monastery and said:

"Blessed One, give medicine to me for my son!"
The master, seeing her situation, said,
"Go, having entered the city,
into whatever house has never before experienced any death,
and take from them a mustard seed."

And so, of course, she went door to door looking for a mustard seed from a house that had never experienced death. Now the interesting thing here is that in this story the mustard seed medicine is not a metaphor, but more of a MacGuffin. The mustard seed was a cheap and common spice, and most households would have had plenty - and we are told that all the households she went to were willing to offer some to her. So getting the seed wasn't the issue. The thing was, as Gotami soon realized, there wasn't a household in the city that had not experienced death.

Realizing this Gotami took her son and laid him in the charnel ground. Having done this, she returned to the Buddha:

Now, there's quite a lot to unpack in this familiar story, and it is worth spending time contemplating it. It could be argued that the Buddha's action, sending a poor grieving woman on a fruitless search, seems a little cruel. In reality the Buddha did have compassion, but knew that for her to come to terms with what had happened she needed to open her eyes, to gain some wisdom as to how the world is. I have written before about the way that wisdom and compassion go hand in hand, and I think that the story of Skinny Gotami is a beautiful example of this.

And, we are told, Gotami soon went on to become enlightened. The tragedy of losing her son was real, but the wisdom she gained was the most compassionate gift that could be given.

I have linked below a fully guided meditation on how Wisdom and Compassion go hand in hand. Feel free to use it if you wish as part of your practice.

Photo by Joshua Lanzarini on Unsplash