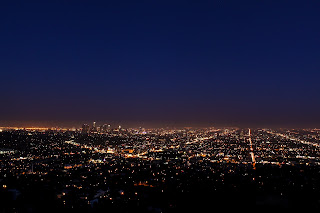 In a previous job I used to travel a lot, taking an flight somewhere most weeks. It was fun for a while but got old fairly quickly - especially when I was going back to the same locations over and over again. But there were some times that were special - like the time when I got to see the same sunset twice in Cincinatti (I saw it first when on the plane waiting to take off, then once more after the plane was in the air), or the times when I got to see a 'glory' (circular rainbow) in the clouds beneath us, with the shadow of the plane perfectly distinct within it.

One of the beautiful feelings I often got was seeing the lines and lines of city lights when leaving or approaching a city at night. It was most pronounced when flying over the suburbs of Los Angeles, where the seemingly endless grids of yellow lights stretch out for as far as the eye can see and it is difficult not to be overwhelmed by the sheer volume of humanity that is out there. It's a strange feeling that is both melancholic and affirming. There really is no good word for it. Or is there?

I am currently reading "The Dictionary of Obscure Sorrows," a book by John Koenig. It is laid out, as the title might suggest, as a dictionary and consists of made-up words to describe emotions that the author feels we don't yet have good words for in English. Now, the linguists among you will point out that all words are made up, and that I should be using the description 'neologisms,' but I think that 'made-up' is closer to the case here. These are words that one man has made up to fill a very specific need - he struggled writing poetry because he could not find the right words to express his emotions, so he started making up words to fit. This became a website and a YouTube Channel and finally the book I am reading.

There are several words that he coined that have become popular, and which people have started using more broadly. One of these is the word sonder, that has been used as the title of a video game, a mental health start-up, more than one music album and even a bike brand. It clearly has resonance with a lot of people. Koenig beautifully defines the meaning of 'sonder' as:

n. the realization that each random passerby is living a life as vivid and complex as your own—populated with their own ambitions, friends, routines, worries and inherited craziness—an epic story that continues invisibly around you like an anthill sprawling deep underground, with elaborate passageways to thousands of other lives that you’ll never know existed, in which you might appear only once, as an extra sipping coffee in the background, as a blur of traffic passing on the highway, as a lighted window at dusk.

When I flew over the miles and miles of lights over LA, part of the complex feelings I was having was 'sonder' - the realization that there were millions of people below me, each one living out their own life, their own story unfolding.

In our Metta practice we run through four specific people and practice feeling lovingkindness and goodwill. The four people are: our self; a friend; a 'neutral' (hardly known) person, and; an 'enemy.' It is tempting sometimes to think of them ranging from 'easy' to 'hard,' but it doesn't take long before we realize that this is far from the case. Sometimes it is hard to feel positively to ourselves, sometimes the well-known flaws of the friend stand out, and sometimes it is hard to identify with the neutral person.

I have written before about how the neutral person can be the key to true unconditional lovingkindness. We have to be able to say that our feelings for them would not change if we were to learn more about them. As I often say with the neutral person we have to come to a place where our goodwill towards them would not change if we discovered that they worked selflessly to help the needy, or if they had a confederate flag on their truck, or both. Our lovingkindness to them would be the same.

This is where I find the concept of sonder to be helpful. Recognizing that the people we know nothing about are - just like us -playing out their own stories, with their own struggles, failures and successes. This is the antidote to tribalism and a key to opening up our hearts to all people.

I have linked below a fully guided meditation where we focus on the Neutral Person - you are free to use it in whatever way helps you in your practice. If you have never practiced Metta Bhavana before, or if you need a refresher, this might be a good place to start.

Photo by Benni Talent on Unsplash