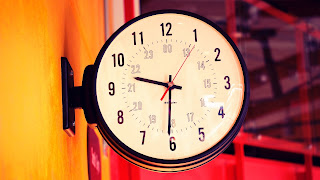 Last night I saw a local theater production of Jonathan Larson's "Tick, Tick... Boom!". This is a short, semi-autobiograpical musical where Larson explores the feelings of 'Jon,' an as-yet unsuccessful composer of musical theater just about to turn thirty. If you are unfamiliar with the piece then I can highly recommend the recent movie adaptation (available on Netflix). As you can imagine the piece goes through the artist's conflict of being dedicated to creating his art, while at the same time fearing that his work is futile, having reached the dreaded age of thirty without success.

In theater and writing there is a concept of dramatic irony, which according to Wictionary can be defined as "A theatrical effect in which the true meaning of a situation, or some incongruity in the plot, is understood by the audience, but not by the characters in the play." In the case of Tick, Tick... Boom! we have an extra level of dramatic irony, as the audience today knows two extra pieces of information that even the writer did not - namely that:

This extra information makes the whole of Tick, Tick... Boom! even more poignant and moving, as we know that part of the protagonist's anxiety (whether he could create great, successful art) was unfounded, while the other side - his fear of his mortality and time slipping away - was not.

In our culture we don't like to face our mortality head-on - somehow we feel that it is an unsavory topic or worse that it is morbid and even unlucky. But ignoring our mortality is foolishness. I have no way to know, but I do wonder if Larson's awareness of his mortality spurred him on to stick with his art and to achieve the towering success that was Rent - even though he was never to see it.

In the Bhaddekaratta Sutta (An Auspicious Day), The Buddha tells us:

You shouldn't chase after the past
or place expectations on the future.
What is past
is left behind.
The future
is as yet unreached.
Whatever quality is present
you clearly see right there,
right there.
Not taken in,
unshaken,
that's how you develop the heart.
Ardently doing
what should be done today,
for — who knows? —  tomorrow
death.
There is no bargaining
with Mortality & his mighty horde.

Whoever lives thus ardently,
relentlessly
both day & night,
has truly had an auspicious day:
so says the Peaceful Sage.

I have linked below a fully-guided thirty minute meditation on 'Showing Up.' Please feel free to use it in your own practice if you wish.

Photo by Swag Photography on Unsplash