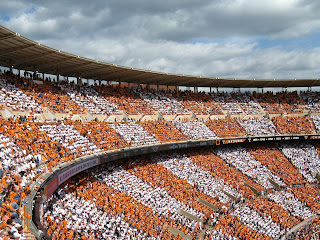 I have a confession to make. I confess that despite having lived in the US for over twenty years, and despite the well-intentioned coaching of many of my friends, I still don't understand the sport that is called 'football' over here. Believe me, I have tried, but at some point I always end up throwing up my hands and exclaiming "so why have they stopped?"
Now I know that to a few of you that will sound heretical, but it is what it is. I do enjoy sports - especially those that use round balls. I enjoy watching the skill and teamwork even when my team gets destroyed 9-0 (as happened earlier this week).
This weekend it's the Superbowl, and while it is likely to be very different this year there are still going to be many people glued to the 43 hours of play, on-field management meetings and adverts that it seems to entail. And of course that's the fun - the excuse to eat chips, cheer for your team and boo the others.
All of this is fun, and is a way for us to take the underlying tribalism that evolution has wrought in us and channel it into a healthy display of appreciation for athleticism, teamwork and dedication. Even when the ball is the wrong shape.
We all know that  the people who support the 'other' team are just the same as us, that the only reason they support the other team is because of the city or the part of town they were born in, or where they went to college. And that if your life had started differently, if you had moved to a different place for work, you could be a fan of the hated team. We know this, and it is part of the fun.
And sometimes it goes sour. There are many instances of when people lose this perspective of commonality and choose to generate true hatred for the opposition. We all know it is crazy and deluded but it happens all the time, where people hate the supporters of the other team so much that it turns to violence.
While these are the extremes it is worth contemplating how we divide the world in arbitrary groups of people, whether it be the teams they support, their social background, the city they come from, their politics, their nationality - even the music they love. All too often we divide the world in these ways, and when we do so we make exactly the same mistake as the sports hooligan - dividing the world into us and them, ignoring the fact that we have more in common than we have differences.
In the traditional practice of Metta meditation we contemplate four primary individuals - our self, a friend, a 'neutral' (little-known) person and an enemy. In doing so we consider two dimensions of how we split the world up - those we know well versus those we know little, and those we like versus those we dislike.
By using the meditation practice to examine our feeling for these people, and practicing feeling love for all of them, we start to understand that these dimensions, these ways of dividing the world, are arbitrary and fluid. Enemies become friends, the unknown can become known. The genius of the form is that we start with four 'buckets' to put people in, but as we continue to do the practice we realize that the buckets themselves are unreal, that they are just a construction. This is the insight we can get from the practice. And it's not easy, we are wired to focus on differences, to hold our own perspective higher than that of others.
But that, of course, is why we do the practice.
Metta, Chris.
I have linked below a fully guided Metta meditation contemplating how we are 'not different,' A few of us have committed to press 'play' at 7pm PT on Sunday 7th of February - you are welcome to join us if you like, or of course you can listen at any time.
cjrobson · Not Different
Photo by Angela Loria on Unsplash
Posted by Chris at 11:31 AM