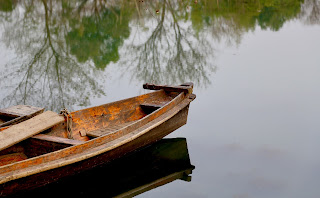 I had a fun dream last night. In it, I was standing in a street with a long row of small brick town-houses (what in England we would call a 'terrace'). In the dream, each house represented a lesson or something I was learning. One house had lots of signs with French words on them - a clear reference to the fact that I am currently trying to learn a little Spanish, and my schoolboy French keeps getting in the way! The street of houses wound off into the distance, and it appeared that new houses were being added on at the end.

There's no mystery in this dream. I am currently having to study a lot of very complex mathematical concepts for my work, and I think this was my poor brain's way of saying that it was full!

But it got me thinking about study and learning generally. When we embark on a meditation path or spiritual journey there is often so much to learn. At first this can be exciting and energizing. After that initial honeymoon period though I often see things going to one of two extremes. One is to become disillusioned and to eventually quit. The other is to become so obsessed with the hunt that it takes over - driving the belief that the next teacher-du-jour, the next self-help book, the next video will be 'the one' that opens everything up. I myself have experienced oscillating between these two extremes, and it can be exhausting.

Like all things, there is a balance, a middle ground to be taken in our studies and our practice.

There is a sutta that can help us with this balance, the wonderfully-named "Water Snake Simile Sutta" (Alagaddūpama Sutta). It has as its antagonist the even-more-wonderfully-named "Ariṭṭha Formerly-of-the-Vulture-Killers" (who sounds like someone straight out of the MCU).

The better-known of the two parables is the parable of the raft (or boat). In the sutta we are told:

“And what should the man do in order to be doing what should be done with the raft? There is the case where the man, having crossed over, would think, ‘How useful this raft has been to me! For it was in dependence on this raft that, making an effort with my hands & feet, I have crossed over to safety on the further shore. Why don’t I, having dragged it on dry land or sinking it in the water, go wherever I like?’ In doing this, he would be doing what should be done with the raft. In the same way, monks, I have taught the Dhamma compared to a raft, for the purpose of crossing over, not for the purpose of holding onto. Understanding the Dhamma as taught compared to a raft, you should let go even of Dhammas, to say nothing of non-Dhammas.”

This a a lovely analogy and very powerful. We put a lot of work into building our 'rafts,' but if we become attached to them then they can weigh us down. Walking over dry land carrying the raft is foolish. But - and this is the point a lot of people miss - we need the raft to cross the water.

Many people interpret this to mean that they can abandon learning, abandon practice and that will be fine - but they often do so while they are still in the middle of the lake!

I think the raft simile is popular because it can be misinterpreted as license to let go of our practice, but it is important to remember that it was taught in the context of another simile - the titular 'Water Snake:'

This gives us the balance to the raft simile. We need to become skillful in our practice and our learning - to have a 'right-graspedness.'

The bottom line for all this is that while we are on the lake we need the right raft. We need to work on that raft in a way that will transport us safely across the lake. We can, however, do that without becoming attached to it, and recognizing that the raft is just our vehicle, not a prized possession.

I have linked below a fully-guided meditation on the parable of the raft. A few of us have committed to press 'play' together at 7pm on Sunday February 28th - you are welcome to join with us if you wish.

Photo by Steve Mushero on Unsplash
Posted by Chris at 11:35 AM