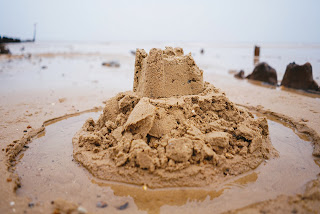 In his book "Teachings of the Buddha" Jack Kornfield recounts the following parable:

Some children were playing beside a river.  They made castles of sand, and each child defended his castle and said, "This one is mine."  They kept their castles separate and would not allow any mistakes about which was whose.  When the castles were all finished, one child kicked over someone else's castle and completely destroyed it.  The owner of the castle flew into a rage, pulled the other child's hair, struck him with his fist and bawled out, "He has spoiled my castle!  Come along all of you and help me to punish him as he deserves."  The others all came to his help.  They beat the child with a stick and then stamped on him as he lay on the ground.... Then they went on playing in their sand castles, each saying, "This is mine; no one else may have it.  Keep away! Don't touch my castle!" But evening came; it was getting dark and they all thought they ought to be going home.  No one now cared what became of his castle.  One child stamped on his, another pushed his over with both hands.  Then they turned away and went back, each to his home.

There are a few things going on in this story, and as a commentary on attachment, rage and impermanence it feels very relevant to what we see happening in the world right now. I do find some comfort in the fact that passages like this, from centuries ago, speak to the same experiences we are having now. Things may sometimes seem like they are unprecedented but any historian will tell you that as humans and as societies we continue to make the same mistakes over and over again. We continue to cling to the impermanent and cause anger and suffering when we do so.

The parable is credited as a translation by Arthur Waley from the Yogacara Bhumi Sutra, though I've not been able to verify the source myself (if there are any source-sleuths out there, do let me know!).

There is a similar image used in the Satta Sutta, which I suspect is the root of the story above. In this sutta the Buddha is asked the rather existential question "To what extent is one said to be 'a being'?" As part of his answer, the Buddha offers the following:

Once we recognize this, that like the children we are attached to the impermanent, we are then exhorted in the sutta to "smash, scatter, & demolish" our craving for them.

It is easy when we read stories like the parable above to make them external - to imagine that it is about how others behave, the mistakes that others are making. It is easy to say 'look how governments, leaders and politicians are acting like the children with sandcastles!' However this is not the point. What we are being encouraged to do is to look at our own attachment to the impermanent, to look at how we are generating conflict and suffering through them.

Sandcastles are fun, but being attached to them is foolish. That much is obvious, but our meditation should be on what are the less-obvious, equally impermanent things that we are attached to?

I have linked below a fully-guided meditation on the story of the sandcastles. A few of us have committed to press 'play' together at 7pm PT on Sunday 31st of January - you are welcome to join us if you wish, or listen at any time.

Photo by Phil Hearing on Unsplash