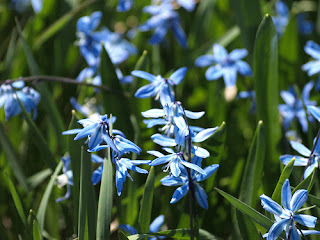 I've always been perplexed by the concept of 'weeds'. The fact that we arbitrarily divide flora into 'good' flowers and 'bad' weeds has always struck me as capricious.

Of course, when we consider Metta or Lovingkindness practice we come up against exactly the same realization - that our division of the world into 'friends' and 'enemies' is equally subjective and unhelpful.

When contemplating this it reminded me of a song I heard in my youth by the Christian singer-songwriter Graham Kendrick. He wrote:

Just how radical this acceptance of all beings - including ourselves - is can be seen from the following passage by Ñanamoli Thera in his introduction to "The Practice of Loving-Kindness (Metta): As Taught by the Buddha in the Pali Canon":

Loving-kindness ought to be brought to the point where there are no longer any barriers set between persons, and for this the following example is given: Suppose a man is with a dear, a neutral and a hostile person, himself being the fourth; then bandits come to him and say "we need one of you for human sacrifice." Now if that man thinks "Let then take this one, or that one," he has not yet broken down the barriers, and also if he thinks "Let them take me but not these three," he has not broken down the barriers either. Why not? Because he seeks the harm of him who he wishes to be taken and the welfare of only the other three. It is only when he does not see a single one among the four to be chosen in preference to the other three, and directs his mind quite impartially towards himself and the other three, that he has broken down the barriers

You can read the whole teaching here.

The full audio, including a  full guided Metta meditation is below.

"The Practice of Loving-Kindness (Metta): As Taught by the Buddha in the Pali Canon",
compiled and translated by Ñanamoli Thera. Access to Insight (BCBS Edition), 30 November 2013,
http://www.accesstoinsight.org/lib/authors/nanamoli/wheel007.html .