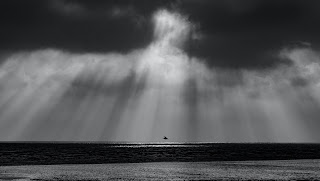 There are some fun (and somewhat disturbing) memes going around at the moment where people try to produce images (and in one extreme case a taxidermy sculpture) that recreate what angels might look like, based on how they are described in the Bible. I'm not going to link to any of them directly as while fun some of them are the stuff of nightmares. There is a reason why in the Bible accounts the first thing they say is 'Be Not Afraid!"

We are at the time of the year where the classic western depictions of angels appear everywhere - usually as beautiful, buff, glowing humans (often female) who just happen to have magnificent wings. This certainly doesn't jibe with what the Old Testament prophets said they saw, but it is much less scary for the children. When I was a kid in England there was a blurry line between angels and fairies, and we would have a blonde doll (usually inexpertly made from a toilet roll with a wool wig and cardboard wings) perched on top of the Christmas tree. This was referred to interchangeably as the 'fairy' on top of the tree or the 'angel.' Of course what is interesting here is that the doll looked nothing like an old English folk-tale description of a fairy either! It seems like to be acceptable to be brought into the home, and so as not to frighten the Children, the image has to be sanitized and made a lot less scary - whether it's a fairy or an angel.

The reason for angels being so prevalent at this time of the year comes from their role in the traditional Christmas story as recounted in the Gospel of Luke, when an angel (having of course started with 'Fear Not...') announces the birth of Christ and ends with:

“Glory to God in the highest, and on earth peace, good will toward men.”

For those of us who wish to cultivate metta in our own lives the angel's declaration should resonate. Metta is usually translated as 'lovingkindness' but also often as 'goodwill' as a universal, unconditional love for all beings.

Ṭhānissaro Bhikkhu explains why 'goodwill' may be a better rendering of metta like this:

[...] These different ways of expressing metta show that metta is not necessarily the quality of lovingkindness. Metta is better thought of as goodwill, and for two reasons. The first is that goodwill is an attitude you can express for everyone without fear of being hypocritical or unrealistic. It recognizes that people will become truly happy not as a result of your caring for them but as a result of their own skillful actions, and that the happiness of self-reliance is greater than any happiness that comes from dependency.

As someone who was brought up in, but who no longer follows, the Christian tradition I like to gravitate towards this traditional message of goodwill to all people at this time of the year. Out of all the Christmas messages, this is the one that resonates for me most.

So, whether they are scary balls of feathers and eyes or beautiful humanoids, let's at least join with the angels in wishing goodwill to all people this season. And remember, like a puppy, metta isn't just for Christmas!

PS. Two years ago I wrote a longer essay on this idea of metta and goodwill - you can read it here.

PPS.  Note the verse from Luke isn't without controversy among Christian theologians, as some question the universal nature of 'good will.' I am not at all qualified to comment on the Christian interpretation of that, but having done a little reading around it I still like to keep with the traditional reading.

PPPS. I have linked below a fully guided meditation on 'Peace on Earth, Goodwill to all men' - feel free to use it in your practice however you wish.

Photo by Zoltan Tasi on Unsplash