Exciting News! For those of you in the Vancouver / Camas area we will be starting to meet again in-person this week at the Breathe Wellness Company. If you are comfortable meeting with us in-person at this time then please join us at 7pm on Sundays starting 20th June 2021. Plan on arriving ten minutes before to get settled. We will be following all current WA State guidelines and I ask that you are mindful and respectful of other people's comfort levels. I will be wearing a mask but will remove it once we are settled and distanced to lead the meditation. For now we will not be having after-meditation tea but hopefully soon. I will be updating our website with the latest details so check back here if you are unsure. 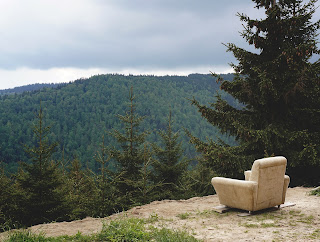 I first learned to meditate many years ago at a small center in Bristol, England. The room where we were taught was a small one on the second floor above a store on a busy road from the City Center. It was on a main bus route and people would mill around outside waiting. The buses that stopped there were double-deckers and from the windows we could see the people in the upper decks. In the summer the center's windows would be open as there was no air-conditioning, and the noise from outside would be loud and often raucous.

One could say that it wasn't an ideal place to learn to meditate - but I would disagree. In many ways it was perfect. You couldn't get angry with the sources of the noise, they had as much or more right to be there than we did. It was an urban meditation center and we quickly got to realize what that meant. We learned to accept the noise, and the people shouting and the deep growling sounds of the diesel engines (and the fumes) simply became part of our meditation.

I have been thinking a lot about silence lately. We like to think that when we meditate we go into a quiet room and shut out all the noise - but of course we can't always do that, and even when we can we quickly find we are simply replacing one kind of sound with another.

In 1952 composer John Cage wrote his most famous work, a piece called 4'33". The score is in three movements, with the instructions for each movement being simply "Tacet" - don't play your instrument. So for the duration of the piece (which happened to be 4'33" for the first performance) the performer, or performers, play nothing on their instrument.

Now many people interpret this as 4'33" of silence, and consider Cage a fraud and/or the piece a joke, but of course this is not the case. Simply because the instruments aren't being played doesn't mean that there is silence. Instead the sounds that come to the fore are the ambient, environmental sounds. And because of that the piece sounds different when played on a piano, or by an orchestra, or by a death-metal band.

One way to look at what Cage is saying is that when we strip away the intentional sounds of the instruments, there is still sound. It will come as no surprise to you that Cage's inspiration for the piece came from his own practice of Zen Buddhism.

When we sit on the cushion we usually chose to be away from intentional sounds, from people talking and from music. But sounds are still there - whether they are the normal ambient sounds or the buses on the street. And part of our practice is to be able to have awareness of these sounds but to not cling to them. To be aware of the sensation of hearing the bus but not to get caught up in our mental formations of buses.

There is a meditation form, known as nada-yoga (practice on the inner sound) that works with these sounds. There is a wonderful overview of this form by Ajahn Amaro called "The Sound of Silence," which I highly recommend reading. In it Ajahn says:

To detect the nada sound, turn your attention toward your hearing. If you listen carefully to the sounds around you, you’re likely to hear a continuous, high-pitched inner sound like white noise in the background. It is a sound that is beginningless and endless.

There’s no need to theorize about this inner vibration in an effort to figure out exactly what it might be. Just turn your attention to it. If you’re able to hear this inner sound, you can use the simple act of listening to it as another form of meditation practice, in the same way one uses the breath as an object of awareness. Just bring your attention to the inner sound and allow it to fill the whole sphere of your awareness.

He does give some words of caution that are worth repeating for those of you who may suffer from tinnitus or similar:

In a small number of people, the inner sound is oppressively loud, usually for an organic reason. In these cases, inner listening is unlikely to be helpful as a meditation practice, since the subjec­tive intensity of the sound makes it less useful as an object to encourage peace and clarity.

So, if this practice bothers or upsets you then it is best to avoid this as a practice. However if that is not the case for you then it can be eye-opening (or ear-opening?) to meditate on these sounds. It allows us to center on a phenomenon - like the breath - that is always with us but seldom brought into our awareness.

Whatever level you wish to meditate on we can raise our awareness of all the sounds we experience - the intentional sounds, ambient sounds, and the subtle nada of our own bodies and minds.

As I delved into the subject of silence over the last weeks I learned and became aware of many things that had been below my awareness - more than I can put in this short newsletter but things I will maybe write more about in future. In the meantime I'd love to encourage you to experiment with more subtle awareness of sounds in your own practice.

PS. Sadly John Cage is mostly remembered nowadays for the controversial and misunderstood 4'33". I don't want you to think that was all there was to him - he wrote a lot of wonderful music, some challenging, some beautiful, some both. Here is one of my favorites.

PPS. If you would like to follow a fully guided nada-yoga meditation please use the link below.

Photo by Boba Jovanovic on Unsplash