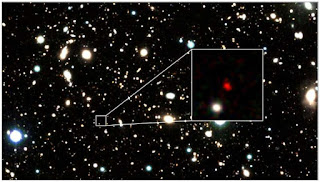 I have been fascinated by all things to do with space and astronomy since I was a small boy, and I love to try to keep up with the latest advances in our understanding of the cosmos. I say 'try to keep up,' as my formal training in physics ended at the end of High School (my physics teacher never forgave me for choosing to major in mathematics).

That said I continue to read all the PopSci books and watch the documentaries just to get a little 'fix' on the infinite. I find that there is little more mind-expanding - and humbling - than learning a little about the vastness and complexity of our universe. As Douglas Adams once observed:

Space is big. You just won't believe how vastly, hugely, mind-bogglingly big it is. I mean, you may think it's a long way down the road to the chemist's, but that's just peanuts to space.

So this week I was excited to read about the latest discovery in cosmology, where a team of astronomers have observed an object (poetically named HD1) that is 13.5 Billion Light Years away, making it the most distant astronomical object ever observed. To put this in perspective the universe is generally accepted to be 13.8 Billion years old, so we are observing the object as it was shortly after the birth of this universe.

And this, of course, is where things tend to get a bit tricky. When we look at very distant objects we are not seeing them as they are now, we are seeing them as they were when the light left them, which in this case is billions of years ago. Time and distance get intermingled and it is easy to start getting confused - even the distance measures we use - Light Years - are simultaneously a measure of time. When we see an object one Light Year away we are seeing it as it was a year ago. Sometimes it is easier just to accept that the universe is "vastly, hugely, mind-bogglingly big."

These might seem like very modern concerns, but in  fact people have been asking questions about whether or not the universe is finite or eternal for thousands of years. In the suttas we are told about a monk called Malunkyaputta, who I have to say I identify with personally as he is the classic over-thinker! We are told that while meditating Malunkyaputta realizes there are many deep questions that he has no good answer to, and that the Buddha has not addressed them to his satisfaction. Getting completely wrapped around the axle with these things he decides that he will confront the Buddha with an ultimatum:

I recommend that you read the whole sutta, as the Buddha's answer is fascinating as he steers Malunkyaputta away from these complex issues that were holding him back and towards a deeper understanding of the dhamma.

There is a Pali word akaliko, which is usually translated as 'timeless.' Like many Pali concepts it is richer than the simple word 'timeless' as it has connotations of being 'outside of time,' 'not subject to time' or 'immediately effective.'

There's a recurring joke amongst physicists (often erroneously attributed to Einstein) that 'time is what keeps everything from happening at once.' In some ways akaliko is outside of time, happening at all times at once.

This might all seem horribly abstract and academic, but getting a glimpse of this timelessness can be very valuable to our practice. Ajahn Chah put it beautifully when he said:

In practicing, don't think that you have to sit in order for it to be meditation, that you have to walk back and forth in order for it to be meditation. Don't think like that. Meditation is simply a matter of practice. Whether you're giving a sermon, sitting here listening, or going away from here, keep up the practice in your heart. Be alert to what's proper and what's not. [...]

Ajaan Mun once said that we have to make our practice the shape of a circle. A circle never comes to an end. Keep it going continually. Keep the practice going continually without stop. I listened to him and I thought, "When I've finished listening to this talk, what should I do?"

The answer is to make your alertness akaliko: timeless. Make sure that the mind knows and sees what's proper and what's not, at all times.

We can choose to struggle with complex concepts like time and the universe as Malunkyaputta did, or we can work to make our practice akaliko: timeless in our hearts.

P.S.: I have written before about the notion of the 'spacious present,' which is related to this concept of timelessness or akaliko. I have linked below a fully guided meditation on this idea, feel free to use it in whatever way is helpful to you.