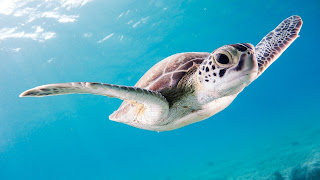 You have probably heard by now that the great teacher Thích Nhất Hạnh passed away yesterday (or today, depending on your time-zone). Thầy had been ill for many years after suffering a brain hemorrhage, and passed away peacefully at his root temple, Từ Hiếu Temple, in Huế Vietnam.

Like many of you I am sure, Thầy was a huge influence on my thinking and path, especially through his books, and while I never met the great man I will miss him.

But while I have a tinge of sadness here the overwhelming feeling I have is that of gratitude. Through Thầy's whole life he left a huge imprint on our society - from his teachings to his acts of compassion and work for peace, his influence will continue. As Terry Pratchett said, “Do you not know that a man is not dead while his name is still spoken?*”

Earlier this week I was reminded of the metaphor of the Sea Turtle that The Buddha uses in the Chiggala Sutta:

"It would be a sheer coincidence, lord, that the blind sea-turtle, coming to the surface once every one hundred years, would stick his neck into the yoke with a single hole."

What this is teaching us is that even being born a human with the ability to learn and reason is an unusual and precious thing, and being born in a time when we are able to hear the teachings is even more precious - so we are told not to waste it.

On the passing of Thầy we should all reflect on our fortune in being alive at the same time he was, and our unfettered access to his teachings and those of many other wonderful teachers. This is not something to take for granted.

PS: A couple of years ago I posted a small tribute to Thầy for his 94th Birthday - you can find it here on our site. I also posted at the time a fully guided audio meditation using his short poem for contemplation, focusing on the line 'Breathing In, I Smile.' I can't think of a more appropriate meditation to do right now, so I have linked it below.

cjrobson · Breathing In - I smile (for Thay)

Photo by Kris-Mikael Krister on Unsplash