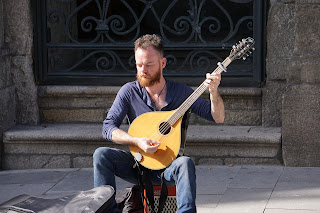 When we talk about our meditation practice and our path we often use the analogy of 'The Middle Way" - so much so that the phrase has been co-opted by many other groups and used to describe political doctrines, military strategies and industrial compromises. Often there is a fundamental misunderstanding that taking the middle way is at best a compromise or, at worst, weakness.

Of course taking the middle way is anything but weakness - it is a path of wisdom, not compromise. It's not trying to thread the needle between extreme passion and indifference, instead it is the recognition that those are both unfruitful approaches, and that they are not the only choices. It's an active choice of finding balance, not a failure to commit.

My favorite example of this active choice is the story of the Venerable Sona. Sona was a monk who, we are told, meditated with such ferver that 'his feet bled.' Sona becomes discouraged, as despite his extreme effort he feels like he has made no progress. Sound at all familiar? He thinks to himself that he was well-off before he became a monk, and wonders if he should return to that lifestyle. The Buddha suddenly appears to him and they have the following exchange:

The Blessed One said to him, "Just now, as you were meditating in seclusion, didn't this train of thought appear to your awareness: 'Of the Blessed One's disciples who have aroused their persistence, I am one, but my mind is not released from the fermentations... What if I were to disavow the training, return to the lower life, enjoy wealth, & make merit?'"

"Now what do you think, Sona. Before, when you were a house-dweller, were you skilled at playing the vina?"

"And what do you think: when the strings of your vina were too taut, was your vina in tune & playable?"

"And what do you think: when the strings of your vina were too loose, was your vina in tune & playable?"

"And what do you think: when the strings of your vina were neither too taut nor too loose, but tuned to be right on pitch, was your vina in tune & playable?"

"Yes, lord," Ven. Sona answered the Blessed One. Then, having given this exhortation to Ven. Sona, the Blessed One — as a strong man might stretch out his bent arm or bend his outstretched arm — disappeared from the Cool Wood and appeared on Vulture Peak Mountain.

This analogy is a wonderful way to think about the middle way. It's not that having the strings too taut or too loose are reasonable choices - they are not. The vina (often translated as 'lute') is unplayable in these states. Tuning the vina correctly is not weakness or compromise but wisdom. There is a place where the strings are perfectly in tune - and this is the only state that will allow the instrument to make beautiful music.

I love the translation Thanissaro Bhikkhu uses here: "you should determine the right pitch for your persistence, attune the pitch of the [five] faculties [to that], and there pick up your theme." This idea of Ven. Sona being able to 'pick up his theme' once he has found the right level of effort for his practice is both poetic and practical - after all, aren't we all trying to 'find our theme?'

Sona did manage to find his theme - we are told:

So after that, Ven. Sona determined the right pitch for his persistence, attuned the pitch of the [five] faculties [to that], and there picked up his theme. Dwelling alone, secluded, heedful, ardent, & resolute, he in no long time reached & remained in the supreme goal of the holy life for which clansmen rightly go forth from home into homelessness, knowing & realizing it for himself in the here & now. He knew: "Birth is ended, the holy life fulfilled, the task done. There is nothing further for the sake of this world." And thus Ven. Sona became another one of the arahants.

It's easy to get discouraged in our practice, and we would all love to 'pick up our theme.' Finding the middle way in our practice is not a matter of some weak compromise between ardent fervor and indifference, but is instead working to find a point of perfect tuning in our practice and in our lives.

I have linked below a fully guided meditation on the stroy of Ven. Sona and the Lute. Please feel free to use it if you wish in any way that supports your practice.

Photo by Beth Macdonald on Unsplash
Posted by Chris at 3:44 PM