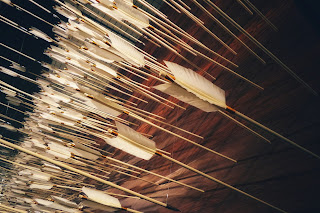 Those of you who know me (or who have followed this letter for a while) will know that I am a football fan (also known as 'soccer' amongst the uninitiated). And this week has been a HUGE week in football. I won't go into the details, but the whole sport came very close to killing itself.

I'm not going to talk more about sport, so those of you who have switched off can come back now. But what I am going to talk about is my reaction to the news and all of the drama. I became a little obsessed - drilling down into every news article, reddit thread, piece of punditry that I could. Despite the gravity of the situation it was fun, entertaining even, watching the whole story unfold (and, trust me, there will be a movie about this one day).

The experience reminded me of a passage in the snappily-titled 'Shorter Exhortation to Māluṅkya.' In this sutta the Buddha is responding to Māluṅkya, who is insisting on knowing the Buddha's position on a number of deeply philosophical topics before he joins with him.  Now, before I quote this I want to observe that this is funny. I like to imagine the audience rolling around laughing, or at very least a bunch of monks sniggering in the corner.

I find this amusing piece of exaggeration a perfect description of how we are today. Now that we have access to so much news, opinion, speculation and plain misinformation it is so easy to become like the hapless victim and spend all of our energy voraciously feeding on everything we can read, watch or listen to. And the key point in the passage is that while we are doing that we tend to obsess on these details and forget completely the whole point - that we need to remove the arrow.

There is another sutta where a similar metaphor of being shot by an arrow is used in a different context. In the Sallattha Sutta ('The Arrow') we are told:

In this we are introduced to the concept of the 'second arrow.' When we get shot (by the first arrow) we have physical pain. But then, on top of the physical pain we layer on emotional pain, as if there were a second arrow. I find this concept hugely valuable, especially when I can catch myself layering on the additional pain of the second arrow. The important thing about this is that it doesn't deny the true pain of the first arrow, it just allows us to recognize that we are in control of a second arrow. So, for example, if a friend makes a throw-away comment that hurts, you can either just acknowledge the hurt (the first arrow), or you can choose to question your friendship, build a narrative of how they never really liked you, recall all the other times they hurt you - all of which is you choosing the second arrow.

As you go through this week you will probably experience many arrows, hopefully mostly small ones. As you do so, recognize that whether you get shot a second time is your choice. The key here is acceptance, something we practice in our meditation. By accepting the hurt of the first arrow we can avoid the sting of the second arrow. And when we practice acceptance - not denial - of the hurt we can begin to heal that pain.

I have linked below a fully guided meditation on Acceptance and the Second Arrow. A few of us have committed to press 'play' together at 7pm PT on Sunday 25th April - you are welcome to join us then if you wish or to use the recording in any other way that helps your practice.

Photo by Possessed Photography on Unsplash