The Story of Ferdinand
Meditation for Sunday 23rd August 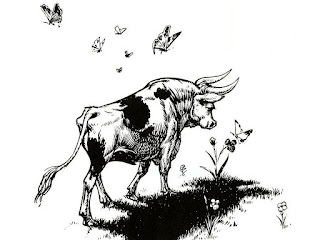 The Story of Ferdinand

Earlier this week I was reminded of 'The Story of Ferdinand' - a beautiful children's book first published in 1936, written by Munro Leaf and illustrated by Robert Lawson.
As a child I loved this book, and read it over and over. There was something about the story that really spoke to me. I wanted to be Ferdinand.
If you aren't familiar with the book it tells the story of a young bull who loves sitting in the shade of his favorite tree, smelling the flowers. One day, due to an unfortunate circumstance, he is chosen to be the main bull in Madrid's bullfight. I'm not going to say more in case you want to read it for yourself (which I recommend). However there is something so pure and inspiring about a strong and healthy bull preferring to smell flowers and sit in the shade rather than fight. It truly is a deep and touching story.
And it turns out that I'm not the only one who thinks so. After being reminded of the book earlier this week I did a little bit of digging and found out that the book had been both influential and controversial since its publication 84 years ago, and continues to be today. The book has been repeatedly banned, was burned by the Nazis and reportedly was declared by Gandhi to be his favorite children's book.
All because a bull preferred to be calm and smell the flowers rather than fight.
I think for me it was the desire for calm that most spoke to me as a child. I am not a naturally calm person, and to see a character in a story that dwelt in such calm - even when being attacked - gave me something to aspire to. In many ways Ferdinand was my Gandhi.
Calmness is something we can all cultivate, and I have linked below a fully-guided meditation on practicing samatha (calmness). A group of us have committed to pressing 'play' together at 7pm PT on Sunday August 23rd. You are welcome to join us then, or listen at any time you wish.
Wishing you calm amid the craziness in the coming week,
Chris.
If you would like to follow me down this flower-lined rabbit hole, then there is an excellent New Yorker article that summarizes much of the controversy over the years. There was a Walt Disney short made in 1938 that follows the book fairly closely. Apparently an Oscar-nominated feature film was made a few years ago but I haven't seen it yet. And this Antiques Roadshow feature was the stimulus for me revisiting the book this week. Enjoy getting to know Ferdinand!
cjrobson · Samatha - Calmness Meditation
If the above player doesn't work for you please click here.
Illustration by Robert Lawson.
Posted by Chris at 12:29 PM