Interbeing
(Meditation for Sunday 10th May) 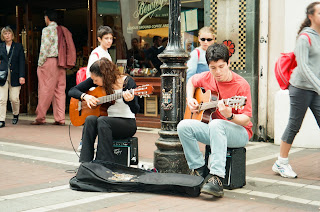 One of the unexpected silver linings of the current situation is how many artists, musicians and performers have chosen to spread beauty, joy and happiness. This is a welcome counterpoint to the tailspin of negativity that we see in so many places. Dostoevsky famously said 'Beauty will save the world,' and I think that is being borne out right now.
Last week I was enjoying one of these online concerts and a strange thing happened. The concert was a 'Tiny Desk (Home) Concert' by the wonderful Mexican duo Rodrigo y Gabriela (you can watch the concert yourself here, I highly recommend it). As I was enjoying the concert I looked them up on Wikipedia and read through some of their background. As I did so I noticed that they had started out in 1999 busking on Grafton Street in Dublin, Ireland. Now I have only been to Dublin once, but I have vivid memories of enjoying the buskers on Grafton Street.
I turned to my wife.
"When were we in Dublin?"
"1999"
"It say's here that Rodrigo y Gabriela started out in 1999 busking on Grafton Street"
"Hang on..."
A few moments later my wife pulled up the above photo. Yes, we had seen them busking the one and only time we were in Dublin, and had clearly been impressed enough by the (then) youngsters to take a photo of them.
It was years later that we started listening to their music, not knowing that we had already seen them right at the start of their career. There was a connection there that we were unaware of until we put all of the pieces together. I wonder now what they would have thought if we had gone up to them then and told them that in 21 years they would be highly successful Grammy-winning artists?
Because of this fun experience I have been thinking a lot this week about our connections, and how everything, everyone and everybody is connected and interdependent in ways that we rarely acknowledge. It is this lack of acknowledgement, this 'delusion' that we are completely separate, self-contained beings that causes much of our suffering. When we see the world as 'other' then we become isolated, believing that we are alone. When we acknowledge our deep inter-connectedness we realize that we are who we are because of everything that has happened - the good and the bad.  The great teacher Thich Nhat Hanh called this 'Interbeing' and put it this way:

There's a lot of compost out there right now, and we can either choose to remain in the delusion that we are separate, or rejoice in the fact that we are all deeply connected and nourishing each other.
Below is a fully guided meditation on Interbeing. You can of course listen to it at any time, but a group of us have committed to press 'play' together at 7pm PT Sunday May 10th. Feel free to join us then if you wish, and also feel free to pass this on to anyone else who might be interested.
Metta, Chris.
PS: As a further connection, the Grammy that Rodrigo y Gabriela won was for their latest album, Mettavolution. They describe it this way: "Mettavolution brings together Rod and Gab’s passionate interest in Buddhism, the history of human evolution and the liberation of the potential we have as a species; all expressed through the medium of two acoustic guitars".
Photo Credit: Eff Robson
Posted by Chris at 12:38 PM